Affordances, Coping, and Blame for Antisocial Encounters on Twitch 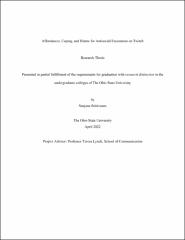 With the rise of streaming platforms, harassment has reached new highs and complexities. In September 2021, Twitch streamers boycotted Twitch in response to a barrage of hate raids that targeted minoritized groups (i.e., Black, queer, and disabled people). These hate raids occurred when a certain group of individuals logged on and created an influx of messages in the chat box that were sexist, racist, and homophobic. Streaming platforms have become a source of income to many and should be viewed as a workplace by the executives and users of the platform. In any workplace, accountability, blame, and consequences would exist for harassing encounters, however, in the online realm, those conceptions are difficult to define and implement, and the attribution of blame depends on a case-by-case basis. Online harassment has been extensively studied, however one gap in the research is harassment in the field of streaming communities and masspersonal platforms like Twitch. This study will consider the affordances of the platform that lead to such harassment, as well as the idea of coping on behalf of Twitch users, as a result of such antisocial encounters. Another gap in the research is in the concept of blame, and how blame is being attributed by streamers, , and audiences in these situations. In the current study, I will seek answers to questions about three areas related to harassment on Twitch. Those areas are the affordances of the platform that may facilitate or inhibit harassment, coping strategies adopted by streamers in the face of antisocial encounters, and the attributions of blame for harassing encounters. In order to study those areas, a pre-established set of measures is used along with varying scales to collect numerical responses. The results established relationships between certain affordances and hostility, as well as certain coping mechanisms and hostility. The results also provide insight into the blame patterns of streamers versus general users for hostile encounters on Twitch.