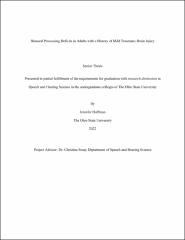 Binaural processing refers to the ability to interpret and assign meaning to sound by the auditory nervous system, especially speech. A person with deficits in binaural processing might present with hearing difficulties (HD), such as trouble understanding speech in the presence of background noise. Mild traumatic brain injuries (mTBI) can have a negative effect on binaural processing, with patients often perceiving HD despite a diagnosis of clinically 'normal hearing.' HD can lead to feelings of isolation, mental health concerns (e.g., depression, anxiety), and have an overall negative impact on quality of life. Therefore, the purpose of the present study was to assess binaural processing abilities in the adult mTBI population. This study compared performance on a binaural processing test battery between adults without a history of mTBI (control group) and adults with a history of mTBI (experimental group). Adults ages 19-63 years participated. The impact of mTBI-related HD on quality of life was assessed with the Hearing Handicap Inventory for Adults and the Adult Auditory Performance Scale. Self-perceived communication difficulties were assessed with the LaTrobe Communication Questionnaire and Cognitive Difficulties Scale. The binaural processing test battery included: (1) dichotic word recognition (DWR); (2) 500-Hz masking level difference (MLD); and (3) the Listening in Spatialized Noise-Sentences (LiSN-S) test. Listening effort was recorded after each measure using the self-administered National Aeronautics and Space Administration Task Load Index rating scale. Results demonstrated that adults with mTBI perceived significantly greater degrees of HD and listening effort than the control group. There were no significant differences between the groups on any of the LiSN-S or DWR conditions. In contrast, the mTBI group performed significantly poorer than the control group on the SπN0 condition of the MLD test. The poorer thresholds of the mTBI group in the SπN0 condition are evidence of deficits in binaural processing that align with self-perception of hearing. It is likely that the large age range and variability in performance masked potential differences at group level on the other binaural measures. At the individual level, 44.4% of mTBI participants performed abnormal on at least two of the binaural processing conditions. Significant relationships were observed between performance on binaural processing measures, specifically the MLD and LiSN-S, and self-perceived HD. Poor performance on these two binaural processing measures correlated with greater self-perceived HD as measured by the questionnaires. These correlations were driven by the mTBI group, because this group scored higher on the questionnaires (i.e., greater self-perceived HD) and performed poorer on the LiSN-S and MLD (i.e., greater speech-in-noise and temporal processing deficits). The significance of this project extends into the clinical world because there is a current need for more attentiveness to the HD of mTBI patients. Comprehensive testing and referral methods that go beyond the standard hearing exam are necessary for these individuals in order to accurately diagnose binaural processing deficits secondary to mTBI. Identification and treatment of mTBI-induced HD may lead to improved outcomes for this population.