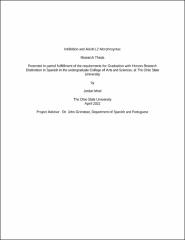 Intuitively, multilinguals have to manage a larger set of linguistic objects that compete for the expression and interpretation of meaning than do monolinguals; an idea that has been extensively investigated in adults and in children; in monolinguals and in multilinguals; in neurotypical populations and in atypical populations (e.g. Peal & Lambert 1962; Bialystok, Craik, Klein, & Viswanathan 2004; Bialystok, Craik & Luk 2012; Prior & MacWhinney 2010; Paap & Greenberg 2013; Paap, Johnson & Sawi 2016; Blomquist & McMurray 2017; Larson et al. 2020; Kaushanskaya et al. 2017; Long et al. 2020). Green (1998) has offered an influential model to account for bilingual language control to suppress the non-target language. In his Inhibitory Control (IC) model, bilingual language control in speech production employs domain-general inhibitory control mechanisms. In the multilingual cognitive system, even greater inhibitory abilities are required to suppress plausible, but ultimately infelicitous, lexical items to meet semantic or pragmatic demands. In recent years, the direction of causality in these relationships has become clearer, due to results from "cross-lag" designs (e.g. Gangopadhyay et al. 2020) showing that early lexical ability predicts later inhibition ability, but not vice-versa, in L1 acquisition. Obviously "lexical items" on this view will include open-class morphemes of all types, including nouns, verbs, adjectives, etc. However, one might also imagine that closed-class morphemes, given that they must also be lexically stored, might also be subject to inhibition when they compete for the expression or interpretation of the associated meaning. Perhaps more radically, following Baayen et al. (2001), one might even expect that high-frequency, fully-inflected forms of verbs, for example, might also be stored lexically as whole units. If this view is roughly on-track, then we might expect inhibitory abilities in adult L2 acquisition to be predictive of morphosyntactic knowledge. Further, the research we are aware of on the executive function-language connection uses direct measures of inhibition, including the Flanker, Continuous Performance, Stroop, Go/No-Go task or other in-person measures, which are challenging to implement face to face, during the global pandemic. There are, however, self-report measures of executive function that have been validated with direct measures of executive function, including the Behavior Rating Inventory of Executive Function – Adult Version (BRIEF-A, Roth et al. 2005), which can be given without being physically present. Our study uses this self-report measure of executive function and a survey-based measure of morphosyntax to determine whether there is a predictive relationship between adult L2 Spanish morphosyntax and inhibition, on the hypothesis that increasing morphosyntactic knowledge will drive a need for increasing inhibitory ability. Our measure of morphosyntax consists of the parts of the Wisconsin Spanish Proficiency Test that only measure morphosyntax. In our sample, these items reach high levels of internal reliability (Cronbach's alpha = .784). Participants are 92 non-heritage, neurotypical adult undergraduate students of 4th, 5th, 6th and 7th semester Spanish as a second language at a large, public university. Results showed that the inhibition sub-scale of the BRIEF-A was predictive of morphosyntactic development (r = -.313, p = .025). We take these results to be consistent with the hypothesis that morphosyntactic knowledge has a substantial lexically stored component.