Accelerometer Use for Activity Monitoring and Step Count in Horses 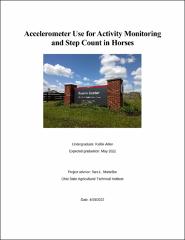 Uses of accelerometers in animal science include activity tracking, gait identification, and lameness detection. Previous studies in horses using HOBO Pendant G Data Logger accelerometers focused on quantifying lying time and time resting a hindlimb. In this study, ten horses (15±2 yrs) familiar with round-pen work, wearing splint boots, and surcingles were used. Horses were weighed on a livestock scale, measured at the withers for height using a height stick, and the length of their front cannon bones were measured with a measuring tape. Each horse was fitted with a heartrate monitor around their heartgirth and splint boots around each front cannon. A cell phone holder was attached to the outside of the left splint boot to house the accelerometer set to record at 50 Hertz. In the round-pen each horse was videoed at each gait (walk, trot, and canter) in each direction. Data from the cameras, heartrate monitors, and accelerometers were collected, synced, and evaluated. Steps were manually counted by watching video clips. To automatically estimate step counts using the accelerometer data the following actions were taken. First, the absolute value of accelerations on all three axes were summed. Peaks of the summed accelerations were considered to indicate steps. As the height of the peaks varied between horses, measurements were considered to indicate peaks when they were at or above the 98.7th, 98.4th, and 98.4th, percentile of summed accelerations for that horse during the walk, trot, and canter, respectively. Step counts from the accelerometer data were then compared to step counts from the video clips. The horses weighed 574±13 kg, were 156±2 cm tall, and had cannon lengths of 27±0.4 cm. Heartrates in beats per min were typically lower during the first direction traveled (walk 57±8, trot 66±11, and canter 76±14) which was the left as compared to the right (walk 96±15, trot 95±19, and canter 105±19). The accelerometer predicted step counts were 101±6%, 99±10%, and 103±9% of the step counts as determined from video footage at the walk, trot, and canter, respectively. This method of activity monitoring has the potential to help estimate activity in future equine studies.