American Catholic Opinions of the War in Vietnam 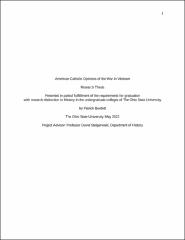 Catholics played crucial roles in both the pro and anti-war movements during the Vietnam War. In the context of the wider social and political changes in both America and the Catholic Church, the late 1960s were a crucial period of transition from the tight-knit, homogenous American Catholic political community of the first half of the 20th century into a more Americanized, divided group in the years that followed. The varying Catholic opinions and actions surrounding the war in Vietnam served as an example of this transition toward diversity. The traditional Catholic opposition to communism provided Catholics with political prowess in the burgeoning anticommunist era of the early Cold War. From this tradition, Catholic religious and political leaders led the charge to support the regime of Ngo Dinh Diem in South Vietnam. At the same time, the Catholic Church underwent drastic changes at the Second Vatican Council, including several doctrinal developments surrounding war, global politics, and communism. American Catholics' responses to Vatican II developments varied widely, as can be seen in the statements of the American Bishops on war and peace. The Catholic anti-war movement vocally and actively opposed the war in Vietnam by organizing marches, burning draft cards, and raiding draft board buildings. Peace leaders such as Fathers Daniel and Phillip Berrigan inspired lay and religious Catholics alike to follow their example. Catholic media outlets, such as the Jesuit magazine America, changed their opinion of the war over time from a staunch anticommunist point of view to one that called for an end to hostilities in the Southeast Asian nation. There was no single American Catholic opinion on the war in Vietnam. Catholics actively supported and fought against American involvement from the beginning, and many judged the war differently as it waged on into the early 1970s.