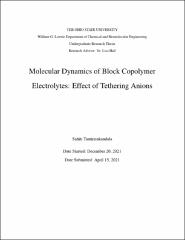 The safety risks presented by liquid electrolytes in lithium-ion batteries (LiBs) have prompted the search for solid polymer electrolyte replacements. The widely investigated salt-doped block copolymer (BCP) system demonstrates promising conductive properties and mechanical stability. However, the transference number which represents the fractional conductivity of lithium ions is insufficient in these systems. A method to potentially increase the transference number considers a single-ion system with anions tethered to the end of the polymer backbone. To identify the effect of tethered ions, our work will leverage the coarse-grained (CG) bead-spring molecular dynamic simulation model with a 1/r4 potential to capture the solvation energy of the tested system. In this project, we vary the diameter of the anion end group and the concentration of end-tethered polymers via simulations to study the ion conductivity, transference number, and diffusivity of end-tethered BCPs. When cation and anion diameters are equivalent, the density distribution of both ions was observed to be the same. When the diameter of the anion was increased, the anion and cation density profiles show that the ions are equally distributed throughout the conducting phase. Dynamics calculations showed that increasing the diameter and decreasing the concentration of the tethered anions enhances the cation diffusivity, cation mobility, and total cation conductivity of the single-ion system with end-tethered anions.