Effects of Different Genres of Music on Milk Yield, Milking Duration, and Behavior of Dairy Cows 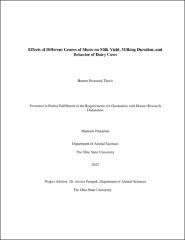 The aim of this crossover study was to explore the effects of different genres of music on cows' milk yield, milking duration, and behavior during milking. Ninety-one Jersey cows were introduced to different genres of music, including Latin, country, classical, rock, and no music (control), in the milking parlor. Cows were exposed to a different genre of music or the control over four 5-day periods, whereby one genre of music was played during each milking. Milk yield and milking time were recorded for all cows. Cows' behavior during milking was video recorded, and later assessed for a subset of cows (n = 38) by scoring flinch, step, and kick (FSK) responses during cluster attachment. Milk yield increased (P < 0.05) by 0.51 kg, 0.42 kg, 0.32 kg, and 0.23 kg when classical music was played, compared to no music (control) and country, Latin, and rock music genres, respectively. Comparatively, milk yield decreased by 0.19 kg and 0.29 kg when no music was played in the parlor compared to Latin (P = 0.0304) or rock (P = 0.0011) music, respectively. Statistically significant differences of 9.6 seconds or less in milking time existed when comparing classical music to the control and Latin music, and the control to country and rock (P < 0.05). Music did not influence cows' FSK responses during cluster attachment. This study indicates certain genres of music, particularly classical music, increased milk production, which indicates potential benefits to animal welfare and herd profitability over time. Other aspects of behavior, including the total number of FSK responses should be considered during udder washing, cluster attachment, cluster removal, and anti-septic washing in future studies, as well as the cows' response to music played in different environments, such as loose housing and across larger herds.