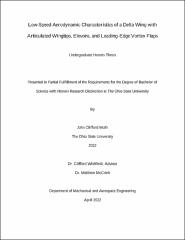 The use of delta wings in modern aviation presents engineers with a wide array of tools to modify an aircraft's performance and flight characteristics. Various control surfaces have been developed to modify and enhance a delta wing's aerodynamic characteristics, such as the articulating wingtip, elevon, and leading-edge vortex flap. The purpose of this research is to determine the individual and coupled effects associated with each control surface listed above. Understanding the performance characteristics associated with each control surface on a delta wing can lead to a net increase in the overall performance of an aircraft. To continue previous research done at The Ohio State University’s Aerospace Research Center, an existing standard 60O swept delta wing model with articulating wingtips was further modified with leading edge vortex flaps and elevons. Tests were conducted in a 3’x5’ open circuit subsonic wind tunnel at a Reynolds number of 5x105. A six-component internal force balance was used to obtain aerodynamic forces and moments acting on the model. The results of wind tunnel testing were compared with baseline data in order to effectively determine individual control surface performance. Relevant results include the elevons ability to linearly change the pitching moment while simultaneously increasing lift. Similarly, the leading-edge vortex flap showed an increase in maximum lift to drag as well as changing the pitching moment to a linear trend. One coupled test utilizing elevons and wingtips also demonstrated the capability to change the aircraft’s stability from unstable to neutrally stable. These findings further demonstrate the ability to enhance and control the aerodynamic performance of a delta winged aircraft in real time.