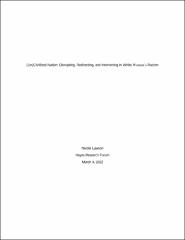 In this paper I will deconstruct the creation process of my dance film, (Un)Civilized Nation and discuss the potential of movement practices to establish embodied, choreographic methodologies for disrupting, redirecting, and intervening in white women's racism. The film is a synthesis of two processes. I conducted movement analysis of viral videos of white women's racial aggression. I then adapted the movement patterns from these videos into an autoethnographic reflection that examined the historical roots of this racial violence and the ways this history continues to live my white body. The purpose of the film (Un)Civilized Nation and the research emerging from its creation is to expose invisible patterns of racial violence and identify means for reprograming these patterns of behavior. In my creation process, I analyzed multiple viral recordings of white women confronting Black people and threatening them with state violence, including Jennifer Schulte (Barbecue Becky), Alison Ettel (Permit Patty), and Amy Cooper (Central Park Karen). Using movement analysis, I examined how each woman initiated the confrontation with her target, how she maneuvered in and negotiated the spatial relationship to her target, and her body postures and motions at each stage of the interaction from the incitement of the conflict, the point when the woman realized she was being recorded, and any activity after she became conscious of the recording. I observed that each confrontation followed a similar trajectory. Each white woman claimed ownership of a shared or public space. When the Black person affirmed their right to be in that space, the white woman lashed out by calling the police, threatening the Black person's safety with state violence. When the white woman recognized that she was being recorded, she cried and attempted to hide or flee the space. Because the trajectories of these confrontations are so similar, I hypothesize that this behavior is learned and, therefore, automatic. As a white woman living with PTSD, I recognize this automation as a potential trauma response. I apply Resmaa Menakem's (2017) concept of the "white body supremacy" trauma response to understand how the recorded women's bodily actions are a part of the intergenerational transmission of race-based bias and fear. I believe these white women are enacting this embodied racial trauma response because of their unconscious awareness of their own precarity within the white supremacist, patriarchal, capitalist system in the United States, as noted by Dr. Jacqueline Battalora (2013). These women's attempts to flee or hide once they know they are being recorded coincides with recognized patterns of weaponized gender performance that Ruby Hamad calls "Strategic White Womanhood" to shield themselves from the consequences of their behavior (2019). I wanted to create a film representing the legacies of the violence inherent in these women's actions and the way that my white body is simultaneously a container of these same legacies and a potential site of present and future racialized violence. To this end, I engaged in a series of autoethnographic improvisations in which I "put on" these women's postures, gestures, and movement qualities. I recorded what these improvisations produced in my body: What memories did they elicit? What physical sensations and emotions did they produce? I also physically explored the natural consequences of this racially aggressive behavior: police violence. Working alone in the studio, I imagined the physical actions of beating, choking, and shooting another human being to understand what it meant for my body to produce the destruction of another. The film that emerged tells the story of a white woman suspended in time. She gradually reveals that she is responsible the death of a Black person. Though she tells and retells the story of the event, she cannot accept the weight of her actions or her guilt, leaving the cycle of white supremacist violence to continue. Within a system built upon the control, consumption, and destruction of bodies, the processes of liberation for white people must come through white people's reflection upon lived, physical experience, recognition of the trauma responses programmed by those experiences, and intentional embodied practice to reprogram those responses in the body and the brain. My work demonstrates that dance-based movement experiences are well situated to facilitate these reprogramming practices because of dance's ability to activate empathy centers in the brain and body as noted in a psychological study, "Dance Expertise Modulates Behavioral and Psychophysiological Responses to Affective Body Movement" (Christensen et. all, 2016). This research will produce potential methodologies for engaging white audiences in the physical work of anti-racism to liberate us all from the cycle of white supremacist violence.