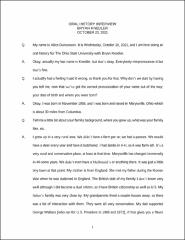 Bryan Knedler describes his time at Ohio State as a leader and organizer in the Gay Alliance, eventually known as the Gay and Lesbian Alliance. He was born in November 1958 in Marysville, Ohio, a small and politically conservative town. After arriving at Ohio State as a freshman, he came out as gay in 1978. That year, he joined the Gay Alliance and helped push the organization from a focus on social gatherings to activism. Among other projects, the group set up and ran a telephone hotline, participated for the first time in freshman orientation activities, and spoke to various classes on gay issues. After earning a second master's degree in 1986, Knedler moved to the Washington, D.C. area. He eventually lived in Mount Rainier, Maryland, where he served on city council for 20 years, and at one point was elected as the city’s first openly gay mayor.