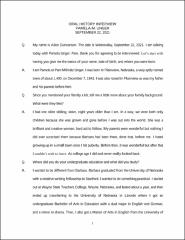 Pamela M. Unger was born in Plainview, Nebraska, in 1943. She obtained a BA in Education with a dual English major, a minor in drama, and a Master of Arts from the University of Nebraska in Lincoln. In 1969, she and her husband came to OSU to work on their Ph.D.s in English. In this interview, Unger explains how she became involved in the movement to establish a Center for Women's Studies. These grassroots efforts were led by the Ad Hoc Committee of Women's Studies, which later helped establish the Office of Women's Studies. Unger served as the Interim Director of the Office until a permanent director was found, and she discusses some of the accomplishments she and other women activists were able to achieve during her tenure, including instituting a small-grants program and partially funding a Women's Studies library. She also discusses her current activist work and philosophy on community organizing.